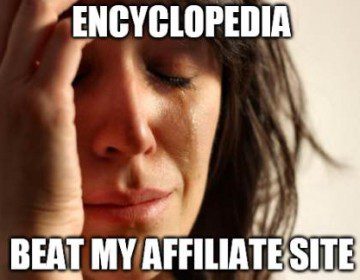 I have noticed something over the 12 years that I have been using Google search. Wikipedia is usually on the front page every time I run a search. This has led me to believe that Wikipedia is probably the single best optimized website on the Internet. I’ve conducted research and found that it does in fact receive more search traffic than any other site in the world.

So why is Wikipedia ranking so highly in the search engines and what can you learn from it?

Wikipedia is the number one website to look at when coming up with an SEO strategy. It’s 68 million webpages receive more organic search traffic than any other site on the Internet. Here are some stats to put it in perspective:

It can be very frustrating spending months optimizing your website, only to constantly be outranked by Wikipedia. Don’t worry. There’s a silver liner. You can significantly improve your own SEO if you understand why Wikipedia is ranking so well.

Why Wikipedia is Dominating the Search Results

Google has unleashed a number of algorithm changes over the past few years. Google Panda, Penguin and Hummingbird forced even the most seasoned SEOs to rethink their optimization strategies. These updates nearly annihilated many weak or thin content sites such as Suite101 and eHow.com, but Wikipedia has continued to dominate the SERPs. Here are some of the reasons that it continues to outrank every other site on the Internet.

Trust seems to have replaced pagerank as the most important ranking factor. Google has clearly stated that it ranks Wikipedia higher because the content is so highly trusted. Matt Cutts has clearly stated that Google taps into Wikipedia to provide in-depth answers to their users. “Google is about answers,” Cutts stated at SES San Francisco a couple years ago. “Wikipedia is focused on knowledge and probably approves.”

In fact, Google trusts Wikipedia so much that it even uses it as a source for its knowledge graph, which provides more detailed information for search users. 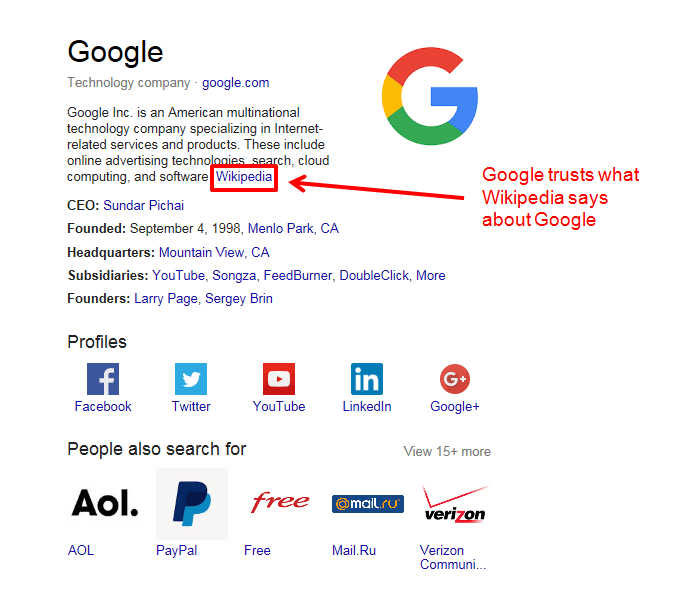 Dear Wiki, I trust you. –Google

Wikipedia relies heavily on user-generated content, but it has strict editorial controls in place to ensure the highest level of quality. The editorial team often revert Wikipedia articles back if the new versions don’t meet their guidelines.

The editors have also tightened their policies over time to combat spam and vandalism. In 2009, they introduced a policy that imposed a two month trial on new Wikipedia accounts before they could edit content. This new policy drastically reduced the amount of spam, inaccurate information, poor use of grammar and other problems that were starting to plague the site.

Few sites can claim the type of editorial involvement that Wikipedia offers.

Wikipedia has received nearly two million backlinks from other websites.

Not only do people love Wikipedia; they love linking to Wikipedia. According to Alexa, Wikipedia has earned backlinks from nearly two million other websites. These backlinks have boosted its standing with Google.

Links remain an important ranking factor in Google. The powerful fresh content that appears on Wikipedia earns links. Jimmy Wales may ask for donations but he doesn’t need to ask for links.

Five years ago, you could point a ton of links to your homepage, watch your pagerank go up and wait for the traffic to start rolling in. Those days came to a screeching halt when Google decided that deep links looked more natural.

Since Wikipedia is highly cited as a source, it has numerous links to internal articles. Their page on Alexander the Great has massive backlinks from other web pages across the Internet, which signals to Google that it is a highly reputable article.

However, Wikipedia’s real edge is its internal linking structure. Many Wikipedia pages link to over 400 other Wikipedia articles.

One of the unique things about Wikipedia is its heavy dependence on user-generated content (UGC). A case study from Search Engine Land found that webpages with UGC received 200% more organic traffic. By relying on its user base, Wikipedia has been able to amass millions of pages of content that are frequently updated.

According to Wikipedia’s own data from 2009 (the most recent available), the mean size of their articles is nearly 700 words. However, the data is likely dated, because scrolling through random pages on the site now shows that they seem to be much longer in 2015. Articles covering most major topics tend to be much longer. For example, the article on Alexander the Great is a whopping 11,692 words. The official Wikipedia page of George W. Bush is almost 15,000.

Numerous studies such as this one from SERPIQ found that the average webpage ranking on the front page has over 2,000 words, which is longer than content ranking lower in the SERPs. Wikipedia pages tend to be much longer, which might help explain their high SERP rankings.

In addition to providing long, detailed articles, Wikipedia makes sure its content provides numerous links in a very organized format. Readers are likely to keep using Wikipedia for their research. As a result, they stay on the site longer. Satisfied users can only mean good things for SEO.

Wikipedia has strict policies on citing sources to support all articles. Citing sources both improves trust and enhances the quality of the product that search engines send traffic to.

“Wikipedia articles should be based on reliable, published sources, making sure that all majority and significant minority views that have appeared in those sources are covered (see Wikipedia:Neutral point of view). If no reliable sources can be found on a topic, Wikipedia should not have an article on it.”

Of course, sourcing itself isn’t sufficient to earn Google’s stamp of approval. Too many publishers have tried copying information from other websites and citing sources to improve their rankings. Google has spoken harshly against this practice. Wikipedia outperforms these publishers by using numerous sources and curating their content in a format that provides value to their readers.

Virtually anyone that has owned a website with web forms has had to deal with black hat SEOs at one point or another. Every spammer on the Internet wants to get backlinks from an authoritative site like Wikipedia.

If you allow unnatural links or links to bad neighborhoods, then your site can get penalized or even deindexed. Here is a screenshot of a message some website owners have received courtesy of Google: 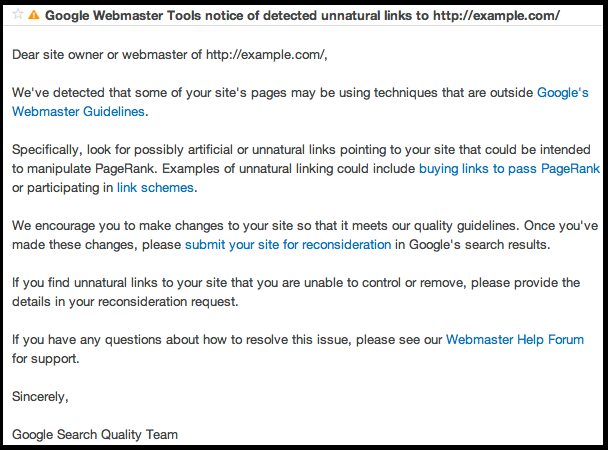 The downfall of the My Blog Guest community proves the danger of excessive linking to other domains. About half of the sites in that community were deindexed for having too many unnatural links. Wikipedia wouldn’t be ranking nearly as well if they weren’t careful about limiting outbound dofollow links.

So how does a site that relies so heavily on user-generated content completely remove itself as a target for spammers?

Wikipedia has responded by adding the nofollow attribute to stop PageRank flow from every outbound link. This has discouraged spammers and protected Wikipedia from Penguin penalties for linking to bad neighborhoods.

Far too many website owners get hung up over their keyword density. All empirical evidence shows that keyword density doesn’t play a meaningful role in SEO.

Take a look at the results for the phrase “SEO company”, which is possibly the most coveted key term on the Internet. The highest ranking page is an article from Forbes that doesn’t use the phrase once in the entire post. However, many SEOs continue to shoot themselves in the foot by stuffing keywords into their content.

Wikipedia on the other hand, doesn’t appear to write content for SEO.  Most of the content is written by site users or managers with no background in SEO, so the content flows much more naturally. Ironically, by deemphasizing SEO, Wikipedia ranks better.

Aside from making pleas for donations, Wikipedia has never run an advertisement in the 14 years it has been on the Internet. Shortly after the first Panda update was unveiled, Google clearly stated that excessive ads were a major concern. Ads raise concerns about trust (since even Google itself has permitted ads to shady sites). Too many ads also can ruin the user experience, so Google has not been shy about cracking down on sites that rely too heavily on them.

If you take a look at many major news sites these days, you’ll probably notice that they are littered with advertisements. Some of the best blogs out there force users away with intent-based sign-up ads. Since Wikipedia has committed to being ad-free, it has completely escaped any risk of algorithmic actions from advertising.

Kalen Smith has been an online content marketer and SEO analytics researcher for the past five years. He has been published on the Content Marketing Institute, Hubspot, Business Insider and other entrepreneurial publications. He is also the author of "The Ultimate Guide to Guest Blogging" and several other informational products on digital marketing. Read more of Kalen's posts here.

“Just a quick note to say, thank you! Your SEO efforts and general insights regarding my website are greatly appreciated! I look forward to many profitable years for our partnership”